What you eat can help you sleep (or not)

The recommended, but often elusive, seven to nine hours of restorative slumber can seem out of reach of many.  In 2019, the Australian Sleep Health Foundation found that more than half of Australians reported suffering from at least one chronic sleep symptom ranging from having difficulty falling asleep, waking too early or being unable to get back to sleep after being disturbed.

When it comes to proactively managing our sleep, avoiding screens is a common recommendation but far less frequently do we hear about the impact of diet on sleep quality. A closer look at the science suggests that our diet can impact our sleep, and vice versa, in a number of different ways. 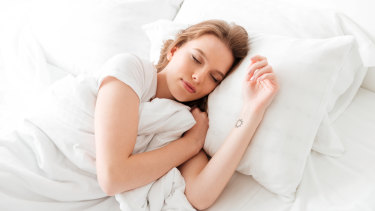 What she ate last thing at night could have an impact on how much of this she gets.

If you have ever been told to try a glass of warm milk before bed, there is some science that suggests this could indeed help you get to sleep. Protein-rich foods including milk, turkey, eggs and fish, as well as leafy greens and nuts, contain the amino acid tryptophan. In the body, tryptophan is converted into serotonin and melatonin, the hormone that helps to maintain the sleep, wake cycle. As such, consuming foods rich in tryptophan within an hour or two of sleep should aid the process.

Avoiding caffeine is another common recommendation. Found in a wide range of foods including chocolate, cola drinks, coffee, and tea including green tea, the stimulatory effects of caffeine can be experienced for several hours after consumption. While individuals can have vastly different tolerance levels, if you are sensitive it is suggested you avoid all caffeine for several hours before you plan to hit the sack, including those squares of dark chocolate.

There is also some evidence to suggest that processed foods, in particular processed meats are associated with sleep issues. A small study published in the American Journal of Lifestyle Medicine found that of 104 patients recently diagnosed with obstructive sleep apnoea, those who were overweight and who ate a diet high in fat had sleep apnoea twice as severe as others. In addition, there was a specific association between processed meat consumption and sleep apnoea severity.

"There some evidence to suggest that processed foods, in particular processed meats are associated with sleep issues."

Although diet and sleep have been the subject of many studies, Sleep and Respiratory Physician Dr Anup Desai, from Sydney Sleep Centre says we do need to be careful with the conclusions drawn from many of these studies. "Food and sleep is a difficult topic, as the studies tend to be relatively small and of low scientific rigour. They do not provide clear evidence of a significant clinical effect on our sleep," he says.

"There are some general guidelines, such as avoiding caffeine and for those with obstructive sleep apnoea, avoiding alcohol. It also appears that high fat and high sugar diets are not helpful when it comes to sleep. Perhaps most importantly though is the effect a lack of sleep has on our food choices the next day."

There are multiple studies showing a lack of sleep is associated with increased portion sizes and higher calorie snacking the next day. In turn, this potentially impacts our health and weight control, long term, which in turn can impact sleep.

"There are multiple studies showing a lack of sleep is associated with increased portion sizes and higher calorie snacking the next day."

One study published in the Journal of Neuroscience investigated the relationship between sleep quality and subsequent snacking behaviour. It looked at the dietary habits of 32 healthy men who were fed a healthy dinner and snack before bed, before half the group were sent home to sleep while the other half were kept awake all night. The next morning participants had their hunger and appetite assessed, their desire for chocolate bars rated and a brain scan completed.

It was found that while both study groups rated similar hunger the next morning, their desire for chocolate was much greater when sleep-deprived, they had higher levels of the hunger hormone ghrelin and their brains used more energy when they were tired. Researchers concluded that this potentially explains why we are more tempted by treat foods when we are sleep deprived.

It is not only adults whose dietary patterns need to be considered when it comes to sleep. Paediatric Respiratory and Sleep Medicine Physician, Dr Jasneek Chawla from Queensland Children’s Hospital regularly consults with children battling sleep issues and sleep apnoea, he advises people to strive for a regular mealtime routine and advise to avoid high-sugar confectionery which can be associated with poorer sleep quality.

"We also encourage children to avoid heavy meals before bedtime but most importantly our role is to make parents aware of the associations between sleep and obesity. Studies suggest that shorter sleep duration is associated with an increased risk of obesity in children and adolescents. Additionally, the risk of breathing difficulties during sleep, such as obstructive sleep apnoea, are much greater in obese children," he says.

For Dr Desai, one of the most powerful things patients can do when seeking to improve their sleep is to give attention to it. "As a society we are busier, eat later, eat more processed foods and use more screens. Ultimately diet, exercise, weight and sleep are all connected so if we are to be successful at improving one, we need to work on all in unison," he says.

And worst case, you can always try that glass of warm milk.

AUTHOR: Susie Burrell is a dietitian and nutritionist.